The Good and the Bad of the Tesla Model 3 Performance 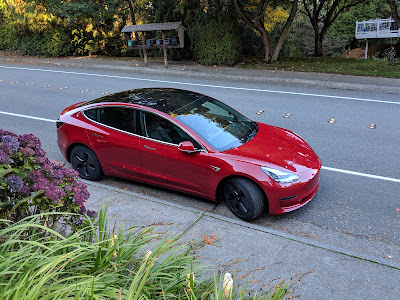 I've owned the car for a couple of months now, have experienced the reality of EV life, and being bought into the Tesla cult. I still to this day smile every time I drive off in this car

It's SO fast! Acceleration is immediate, consistent, and intense. An official 3.5s 0-60mph time, but real-world measurements place it closer to 3.2s. It's hard to convey just how amazing the instant power and perfect traction of an EV are for the driving experience.

Phone key. Much maligned in early releases, and rightfully so - many owners had inconsistent results unlocking and driving their car, across popular brands of phone. But I was lucky enough to receive the car almost immediately after a major app update, and it has worked reliably. I walk up to my car: it's unlocked. I walk away, it's locked. I shift to drive, it drives. It feels primitive by comparison to actually have to carry a separate chunk of plastic around.

The phone key has failed maybe twice since I took delivery. In that case, I have the card key in my wallet; which is enough to get me going while I reboot the phone.

Charging at home. My theory was that, between charging at work, and free supercharging for life, I would never spend a single Wh of my own electricity. Well, ownership has taught me something: the $1's a month I'll spend on electricity is worth it for the convenience of just plugging in at home. I don't have to worry about when or where to charge, because I'm full every morning. Whereas, when I end up driving the minivan, I'm invariably looking at "20 miles range" and debating whether I have time to gas up.

Admittedly I'm charging on 120V. It's VERY slow to charge - it would take three days to charge from empty! But since I'm constantly topping up,it's never a problem. For the rare time I'm running under 50%, I'll stop at the local supercharger and get full in under an hour (for free!).

Single-pedal driving. With regenerative braking at max, you very rarely have to actually use the brakes, except to come to a full stop. This is weird for many drivers at first, but within an hour or so I really appreciated it. It makes downhill a far better experience, and takes a lot of effort out of driving in traffic.

Modern conveniences. Hey, I haven't owned a new car in awhile. It's nice that my garage door opens and closes automatically as I approach.That my seat and mirrors remember my position. A full suite of distance sensors, backup camera. USB power.

It's good, but could be better.

Center touchscreen. It really sold me on the car - the eyeline seemed so perfect. I still love it, but I admit the right-of-driver position adds just a hint of eye fatigue over the front dash. The biggest challenge is blind-spot warnings - those I would have preferred in front of me (like the Model S).

Autopilot. Works as advertised - you can pop onto the freeway, whether stop-and-go or full speed, and it will drive for you. For morning commute, it will probably save my life one day. With a little care, it will even work on city streets (you just have to handle stop signs and lights... for now...). Honestly, with the AI and sensors, it probably handles highway driving better than I do, given it's better perception of acceleration and instant reaction time.

Still, I wish they handled lane splits/merges better. Also, vehicles changing lanes is very much binary - they give no accommodation to a vehicle signaling a lane change until they are at least 50% in the lane. I still find myself taking over in these situations in deference to the drivers around me,

Auto-parking is still not consistently detecting spots, though it parks well when it sees one. Reverse-in parking is just a gimmick.

Even I can admit it's not perfect... and not everything can be fixed in a software patch.

Battery Preconditioning and SoC dependence. Certain things behave differently based on the state of the battery. If your battery is cold, regenerative braking is greatly reduced. The "battery preconditioning" available on the Model S is honestly not effective on the Model 3. Regenerative braking is also reduced when the battery is full. Similarly on a low-charge battery, the top end of your power starts dropping off around 20% charge - 5 seconds to highway speed seems entirely reasonable unless you are used to doing it in 3.

Comfort. I'm told by everyone that my car is amazingly comfortable. It looks and feels premium through and through. There's amazing levels of adjustment that let me sit better than any other car. But there is just something about that driver's seat that my butt won't get used to.

I've gotten used to the firm and forward headrest, though from my reading, this is a common design in newer cars. Apparently you're not supposed to actually rest your head on a headrest? Easy for someone without an XL head to say...

The claim that three carseats will fit across the back of a Model 3 seems dubious from my experience.

Automatic wipers. The sensor underestimates the conditions, simple as that. In Seattle weather, you'll have to turn them up manually. Here's hoping to a fix in a software update.

Bluetooth. I've had issues with frequent media subsystem crashes (lose audio for ~5s), though I think a recent update has finally nipped that one in the bud. Still, it isn't always 100% to connect to my phone, or lose connection getting into the car.

Also, seriously, I don't want to use your stupid Tesla voice commands that control almost nothing. Let me trigger my phone assistant from the wheel!

App Control. Great idea, but limited by the "Waking Up" problem. If the car is idle, it can take upwards of one minute to establish a connection. If you want to quickly preheat the car, it can be frustrating to sit staring at a spinner.

On the other hand, a public API! I can (and eventually will) fix this through the power of coding.

Note the wakeup issue does not apply to phone key.

Hint: all the problems with this car are around the Tesla delivery centers that serve them.

Delivery scheduled last-minute while I was away, then rescheduled for weeks later once they confirmed the delivery.

They didn't process my payment until almost a week after I took delivery (while insisting I had paid weeks earlier) - and support calls to follow up were about 40 minutes hold time on average.

The referral process was a mess; if you're not buying it online, the dealer is liable to skip the step entirely, then manually submit the request into some black box system that might or might not work. My referral bonus (free supercharging) didn't show up online until two months after I took delivery, though to be fair they never actually billed me for supercharging.

They did not even order my license plates for 40 days (out of 45 allowed days in Washington). My tags expired, and I was stuck driving a rental Chevy Impala while they got me plates. I'm no car snob, but I think I'm at the point where I can say with conviction that, as a Tesla driver, that a Chevy Impala is beneath me. It was an awful experience.

There's a (very minor) issue with my steering column; a known issue that should be a quick fix. Great, first service appointment is a month out. But, even then, they cancelled it without telling me, because the part was back-ordered. Seriously, Elon invented Paypal, but can't send me an email notice that my appointment changed?

Posted by Michael Jarrett at 11:08 PM